Writing Details: get from blah to awe

A gal working on her first illustrated story (one that will most likely turn out to be a series) recently sent me an email asking for help in writing the type of details that really enhance a story rather than slow it down. As she put it, “Blah, blah, blah – who cares?”

That’s of course exactly the type of writing we all want to avoid. But how do we know the difference between a great nugget of a detail and a pointless (even stupid) bit of tedium?

There’s a fine line between giving readers the details they need to more fully experience a story and overloading them with more wordage than they really want. So how do you as the writer figure out what is working and what is garbage?

This is a tough thing to tackle, because oftentimes the words in our minds sound differently in our heads than they do to other people. Sometimes too, the details are stuck in our heads, not reaching the page at all.

There are a lot of effective ways to attack this broad and at times overwhelming problem, so I’m going to break it down by types of actions you can take and address those in different articles.

Here’s one way to get from blah to awe in your writing details.

One of the best ways to provide great details in your work while still making it absolutely important to the story: create multi-functional details.

Multi-functional Details. These are details in the writing that accomplish more than one thing in terms of driving the story along. A multi-functional detail is one that gives detailed information that does two or more things to benefit the story.

In other words, you can’t simply give a detail and expect people to care. It has to have some sort of storytelling function.

For example, start with a common detail…

This is a simple fact, and it’s true if you as the storyteller decide that it is for Scarlett, but it isn’t that interesting. It’s a boring detail that doesn’t connect to anything for any reason. If it doesn’t matter to the story, it won’t matter to the reader either.

That means you are faced with two choices at this point: either give the detail a couple of functions for the story, or cut it entirely. (That said, if your story is an illustrated storybook, you don’t need to write that the character’s favorite color is blue but still communicate to the reader that it is. Instead, you can simply show that in the illustrations – she wears blue, everything in her bedroom is blue, etc.)

Scarlett’s favorite color is that same special blue that shone in her dad’s eyes the day he returned from Afganistan.

This detail reveals something about Scarlet’s personality, her past, something about her family, and it’s strong enough and specific enough that it could help set up where the story is going. This is then a powerful detail because it really matters to the protagonist and the story that her favorite color is this particular shade of blue. Notice that it isn’t just that Scarlett’s dad’s eyes are blue, but the specific way they looked on that particular day he returned.

Scarlett’s favorite color is Winner’s Blue, the same as all the blue ribbons she has ever won for any competition she ever bothered to enter. She never, ever lost to anyone and as far as Scarlett was concerned, that’s exactly how it would stay. Until one day, she got Second Place!

In this example, Scarlett’s favorite color isn’t just about her driven, competitive character, it also sets up the plot – quite directly. In very few words and with a single detail about the character, this establishes the protagonist’s status quo (what ultimately needs to change) and sets-up the inciting incident (the first turning point) for the story.

Every morning, Scarlett bounces out of bed and puts on her favorite color in the whole wide world. What’s her favorite color? It’s the same as her name! Scarlett! She likes to let everyone know, so she always wears a dramatic ruby red. All her shoes are red, her jewelry is red – and her hair? You guessed it. Nothing about Scarlett has ever been about any other kind of color.

With such detail about the detail, we’re no longer simply mentioning a character’s favorite color. We’re providing two or more of these storytelling building blocks:

Give this kind of multi-purpose attribution to your details, and you’ll know for certain that they aren’t blah because they’ll be absolutely necessary.

What about you? Do you feel sometimes that your writing is blah? Have you read somewhere a passage that sent you into a rage it was so poorly crafted? Write below and let me know – or just send me a note.

There are other ways to make sure your writing has power. For more, sign up for my newsletter and I’ll send them right to you.

--Download Writing Details: get from blah to awe as PDF --

Follow me!
K.C. Hill
Due to health issues, K.C. Hill isn‘t currently able to manage GreatStorybook, but there‘s plenty of good stuff here to mine. Have at it!

Follow me!
Latest posts by K.C. Hill (see all)
START
A STORY
GET AN
AGENT
GET
UNSTUCK
BE
PRODUCTIVE
BE
CREATIVE
GET IT
PUBLISHED
CREATE REAL
CHARACTERS
FIND
READERS 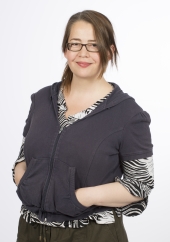 Get my latest tutorials, tips and tools

to help you become a better writer!

We hate SPAM and promise to keep your email address safe.